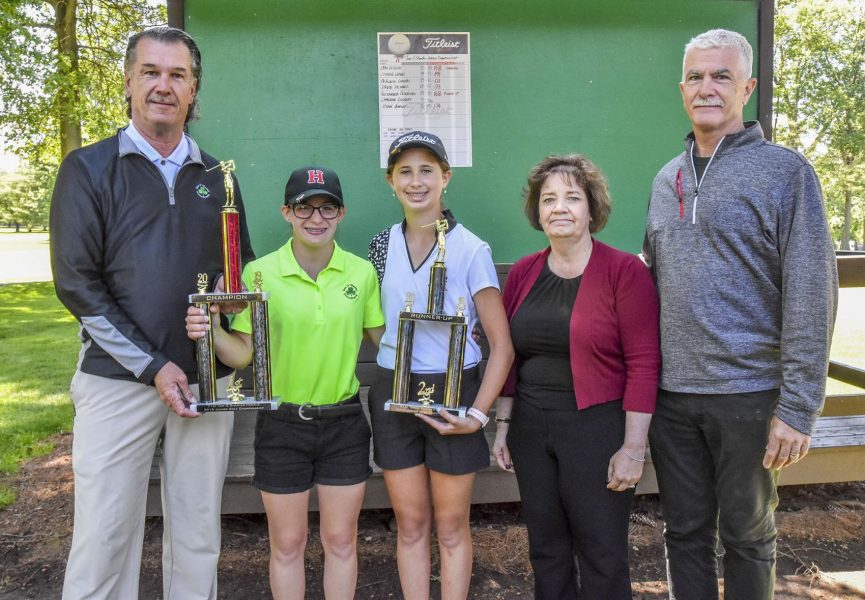 History was made at the 71st annual Herald-Tam O’Shanter Junior Golf Championships Friday, but not in the way many people expected.

Four-time champion Conner Stevens was favored to win a record 5th crown, but didn’t compete because of personal reasons. That opened the door for an even more historic moment:

Girls finished first and second, the only time females have finished in either spot since the tourney was founded in 1949.

“It’s awesome,” said Leah, who said it “ranks right up there” with being part of the Hickory High girls golf team that qualified for the PIAA State Tournament last season for the first time ever. “Both were enthralling.”

“It’s crazy,” continued Leah, who was the top girl finisher last year. “My goal coming in was to keep low on the radar and play my game and just have a couple of good rounds. I was a little nervous today (leading by 6 strokes after the opening round Thursday). I felt the pressure, but I tried not to get too carried away and just play my game.”

Alexandra pointed out: “I felt about the same as her, I just wanted to play the best I could. I didn’t play my best yesterday, but I played better today.”

It was a big day for girls, as third place went to Hickory’s McKenzie Gustas with 89-82–171. Leah said she is looking forward to two years from now when Alexandra can join McKenzie and her on the Hickory team and make another run at a state title.

“It was a history day, pretty cool,” said Tam O’Shanter Director of Golf John Kerins, pointing out that the institution of the PGA rule allowing girls to play at 85 percent length on holes as compared to boys makes an impact.

“It’s a good rule and the way it should be,” said Herald Publisher Sharon Sorg, beaming at the thought of girls finishing at the top of the tournament. After all, she is the first female publisher at The Herald that’s history dates back more than a century and a half.

“This is great for girls golf,” said Kerins. “I think Shelley Sanders (who went on to a pro career) finished third once. But what an opportunity for girls to go to college on scholarships to play golf.

“The numbers were down this year, but the competitiveness and sportsmanship were still there.”

NOTES: Leah, who started playing in tournaments at the age of 11 or 12, is the daughter of Ed and Gina Benson and takes lessons from Scott Bradley at Hidden Oaks. Alexandra, who began tourney competition at age 8 or 9, is a daughter of Constantine and Jana Petrachko and trains at Avalon Lakes.